Thank you for your patience while we retrieve your images.

The Asian Festival in Albany Park took place on Lawrence Avenue between Kedzie and Kimball Avenue on June 14, 1981. The festival was a blend of Asian cultures enjoying the music, dance, food and vendors featuring Asian imports. The Korean fan dance which is called
Buchaechum can be seen in frame #01-07 and #41-44. It is is a traditional dances in Korea performed by a female dancers wearing Hanbok, a Korean traditional dress. The dancers create natural shapes of flowers, butterflies and waves using the peony-colored fans. A bouncy house entertained the kids sponsored by the City of Chicago while Mayor Jane Byrne was in office. Jane was the first female mayor of Chicago who lasted one term until Harold Washington was elected in 1983. 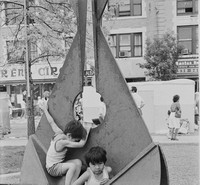